I finally found a minute to sit down and get a few fun things done. It’s been all work and minimal play lately, so I’m pumped to get back on the blog and share something sweet with you.

Very recently, I had one of the best experiences of my life. Like, ever. You know that feeling you get when you see someone you really missed? Or when you hug your mom after being away? Or being re-united with your best friends after years apart? Combine all of those feelings and call it the National Sweetheart Pageant. It’s basically like a Miss America-style competition, but better. Sorry not sorry, Gretchen.

The National Sweetheart Pageant is a 75-year tradition in the sweetest little town of Hoopeston, Illinois. Like many festivals in the midwest, a pageant was held in conjunction with Hoopeston’s summer sweetcorn festival to select a young woman to represent the area during the celebration. After WWII, the Hoopeston Jaycees invited more states to be involved, and by 1952, they began inviting the 1st runners-up from each state’s Miss America preliminary competitions. Additionally, judges from the Miss America circuit were invited to judge the pageant, allowing contestants to gain feedback and critique from the best in the business. 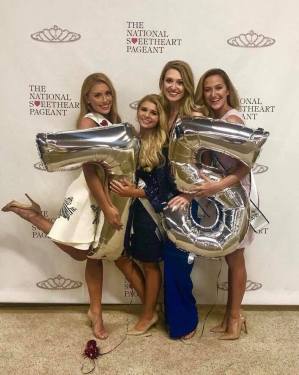 The idea was to bring national recognition to Hoopeston’s sweetcorn festival and give young women from the Miss America Organization an opportunity to polish their skills before competing in their states’ MAO preliminaries again. Come 2016, the Miss America Organization made changes to their contract, allowing the Jaycees to open up the National Sweetheart Pageant to a wider pool of contestants, including women who may have aged out, placed beyond 1st runner-up in their state, etc. (Read more about the National Sweetheart Pageant here)

I’ve heard nothing but positive things about the National Sweetheart Pageant from girls who have participated in the past, and I knew this was an opportunity I wanted to take advantage of if the time was right and I had the chance to do so. Upon placing 1st runner-up at Miss Wisconsin this year, I asked myself, “What better way to finish the year than by applying for Sweetheart?” BUT, I was hesitant.

Since Miss America changed their contracts in 2016, no woman is allowed to hold a local title within the Miss America Organization while simultaneously competing at National Sweetheart. Since my local MAO title would not conclude until January 2019, I was initially not eligible to compete at Sweetheart unless I resigned as Miss Seven Rivers. However, my local organization would not be not holding a 2019 pageant, so my title could end at any time after Miss Wisconsin, making me eligible for Sweetheart. 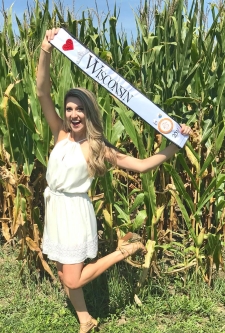 I decided to apply on a whim after thinking some things through. I wasn’t sure if I wanted to prepare for another pageant so soon after being pretty burnt out after Miss Wisconsin this year. Based on how anxious I was at Miss Wis, I debated if it would be mentally healthy to put myself through another week of competition. I was also at a point where I was a recent college grad and didn’t have a full-time position yet, so I weighed the pros and cons of starting my career immediately. Among all of these considerations, something in my heart told me to just take a leap and apply. After all, if something else came up, I could always decline if I were accepted, right?

I received an e-mail a couple weeks after I submitted my online application. It was close to midnight and I opened my inbox to see, “Congratulations! You have been accepted to be your state’s representative at this year’s National Sweetheart Pageant! This announcement will be posted publicly tomorrow…” HOLD UP. My family had no idea I applied, my local director knew I was considering applying, but I had NOT figured out the logistics if this were to happen. I initially thought that I’d have the chance to accept or decline (ya know, like how college acceptance letters work) but once you’re in, you’re in. Of course, I was giddy and so pumped to have this opportunity, but the anxious side of me had not prepared to jump right in.

After only a few hours of sleep, I woke up the next morning and told my parents I’d be competing in a short 6 weeks, and my fantastic local director was working out the details to make sure I was eligible (God bless my village). After a few conversations, I was Miss Wisconsin Sweetheart 2018!

In terms of preparations, I was VERY relaxed. I prepared so heavily for Miss Wisconsin, so I decided I’d take a breath and have fun with this. I wanted Sweetheart to be something I looked forward to, not something I’d have crippling anxiety over. I kept up with the news here and there, ran through my talent when I had time, and believed that this would be a positive experience regardless of how I placed.

The fun part about Sweetheart is that it’s a family from day one. From the moment we all connected after the announcement, the group chats took over and we became close friends, even before we arrived in Hoopeston. From the production team to the host families to the volunteers, everyone was so invested in making this a positive experience for us. I had quite honestly never been more excited for a pageant in the 5 years of my involvement.

The time came and I packed up my car to make the five-hour drive to my new home for a few days. When I arrived in Hoopeston on Wednesday, right before Labor Day weekend, I met some volunteers and the other ladies who drove in as we waited for the bus to come from the airport with the girls who flew in.

Once we were all accounted for, we met our host families to head to the welcome dinner, put on by our official host for the week, Miss Hoopeston, and her family. Again, I can’t stress FAMILY enough!

The days following consisted of rehearsals and appearances, much like Miss Wisconsin week. We had free time to wander around town to meet various sponsors, have conversations with the locals, and bond with our host families. Every meal we had was made with so much love from a variety of local organizations and volunteers. Seriously, so. much. food. We were having too much fun that most of us forgot that we actually had to compete the next day. 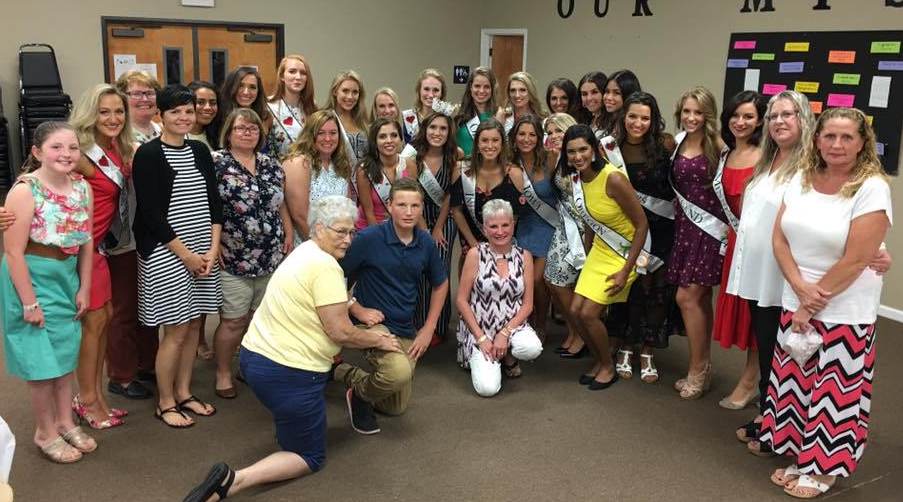 Preliminary competition took place on Friday and Saturday over Labor Day weekend, where all 20 contestants competed in Interview, Lifestyle & Fitness in Swimwear, Talent, Evening Gown & Onstage Question. Prior to Saturday’s preliminary night, though, we had one really exciting new element: the Sweetcorn Festival parade, which actually counted for 5% of our preliminary score.

For those who are not too familiar with Miss America, there is an annual parade down the Atlantic City boardwalk called the “Show Us Your Shoes” parade, where each contestant dons an outfit that represents their state. We got to have a similar experience at the parade in Hoopeston. Each contestant chose a theme for their state outfit and we each rode in a Corvette convertible to show off our outfits on the parade route. I debated between a few themes to represent Wisconsin, from a dairy theme to the waterpark capital to Door County cherries. I ultimately decided to create an outfit that would pay homage to the culture of my hometown region near Baraboo, Wisconsin, where the Ringling Bros. Circus was born. I don’t have a sewing bone in my body, so this thing was made almost entirely of hot glue and diligence. I must say, not too shabby. 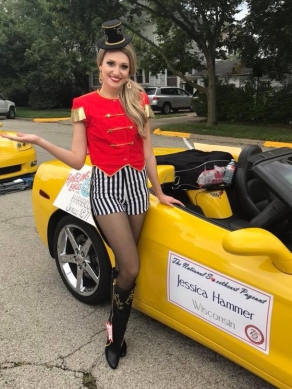 Before the parade began, we met with the judges while wearing our parade outfits to have a short 2-minute conversation, explaining the inspiration behind our outfit choices. Riding down the parade route, it was so cool to hear people yelling your state, and watching all the kids light up at the sight of our fun costumes. This was definitely a highlight of the Sweetheart experience.

When the night set in, it was time for the preliminary competition. You best believe I was STOKED to wear my swimsuit one more time and strut my stuff. All went well, and at the end of the night, I ended up in a three-way tie for the Lifestyle & Fitness in Swimwear Award! Say what?!

The next morning, we all gathered for a meet and greet with the public before visiting with more community organizations and volunteers. I woke up not believing that it was the last day I’d be spending with my newfound family. I did NOT want to leave.

Soon enough, the final night of competition creeped up too quickly. By the end of the week, we had all grown so close that it really didn’t matter who made Top 10. We were all genuinely excited for one another, which made the experience that much more positive for us all. 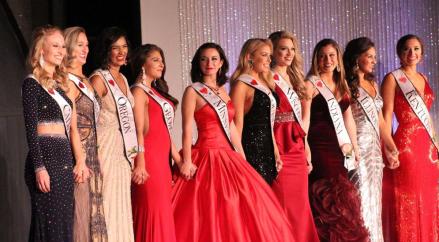 Based on preliminary scores, the Top 10 was decided, and Wisconsin made it into the mix! This meant I had the chance to compete in Lifestyle & Fitness in Swimwear, Talent, and Evening Gown one more time. I had an absolute blast and just had fun performing again.

My progression ended there, but I was very proud to end up in the Top 10 at a national pageant, and also leaving with a preliminary win and the Ronnie Reed Community Service Award. The fact that National Sweetheart awarded scholarships, like MAO, was another huge perk to my already-fantastic experience. BYE STUDENT LOANS.

My beautiful friends, Louisiana, Kentucky, Oregon, California, and New York, advanced to the Top 5 and the title went to my Louisiana sister (who I’m honored to say is the only person I know who can completely contort her body while swinging through the air on silks). The talent at this pageant, guys, I swear.

I ended the night back at my host family’s house, sitting on the living room floor eating a piece of homemade pie, enjoying a few last laughs with my new family and all those who traveled to see me. I hesitated as I packed my bags and reflected on the definition of community, “a feeling of fellowship with others.” Before Sweetheart, I thought I understood community, but boy, was I wrong. The people of Hoopeston showed me what a true community feels like. The entire town came together to support all 20 of us, making sure we felt welcome everywhere we went. I cannot thank this beautiful place enough for filling my heart up so full.

I received a few questions during this process, so I thought I’d throw in some of the frequently asked right here…

Why did you choose to compete in the National Sweetheart Pageant?

Why isn’t National Sweetheart in relations with MAO, and why did you have to give up your title?

Why don’t all 50 states compete?

What is the difference between the Miss America Organization and the National Sweetheart Pageant?

How did your experience in MAO differ from National Sweetheart? 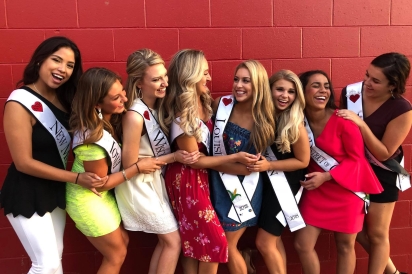 Where did you stay while you were at the pageant?

What did the judges ask you in your interview?

Who can compete at Sweetheart?

Will you be competing for Miss Wisconsin again?

As I conclude, never have I ever had such a positive, welcoming experience in my life. THANK YOU to my family and friends, pageant peeps, and Hoopeston family for supporting me on this little adventure. The Hoopeston community and everyone involved with the National Sweetheart Pageant will always be tucked away in a very special place in my heart. Until next year, family. 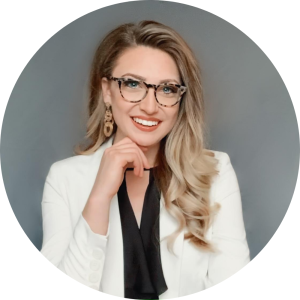 Hi there! I’m Jess, welcome to my tiny corner of the internet, stuffed with fried cheese and gold glitter. While you’re here, I hope you see me — JUST Jessica — completely, authentically, originally just Jessica.